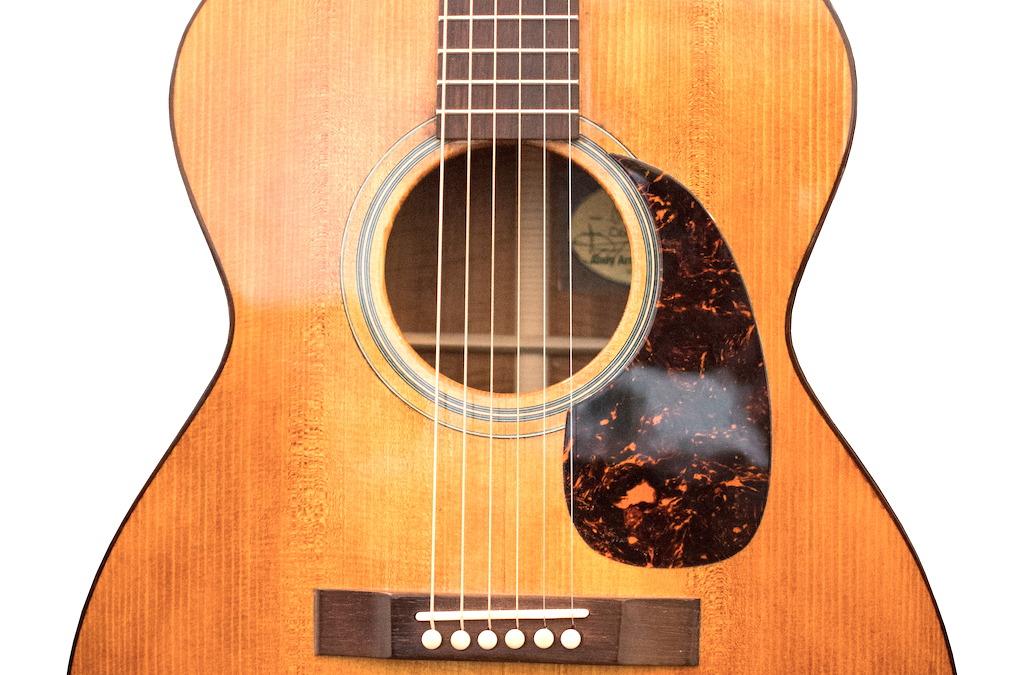 Andy Armstrong, a local Bozeman luthier and founder of Pirate Guitars, originally grew up in Rochester, Minnesota. Andy is an interesting guy–he has a love for the outdoors, he is well traveled, and he builds guitars (an exceedingly interesting and rare pursuit). We often think of guitars as being mass produced in large factories, shipping from far off countries to grace the stages and concert venues we love so much. However, there is a market–no matter how niche–for custom built, handmade guitars, and we figured there would be no better way to gain insight into this mysterious business than to sit down with a luthier. We met up with Andy to talk about his passions, influences, and upbringing–everything that brought him to Montana to pursue the business of crafting instruments.

When asked about growing up in Minnesota, Andy stated that “there wasn’t much for kids to do except play outside and be active… so [it was] pretty great.” At the age of 16, Andy moved to Stuttgart, Germany, after his Dad took a job abroad. For some of his siblings, this would be a trying decision: moving to a foreign land far away from their friends, family, and everything they knew growing up, but for Andy, this wouldn’t prove to be a difficult transition. Andy has always been keen on new experiences and he was ready for a change of scenery, knowing it would at least be an interesting experience to finish school in a foreign country.

After graduating high school, Andy decided to attend college in Europe. He applied to a university in Madrid, Spain, and studied there for a year before dropping out. After a few years in Spain, Minnesota beckoned Andy back to the states, bringing him to the Twin Cities to finish his Bachelor’s Degree in Fine Arts at the University of Minnesota. In Minnesota, Andy’s older brother encouraged him to pick up a guitar, a passion he wouldn’t put down.

Following graduation, Andy moved to Eugene, Oregon, for a change of pace, and life in the pacific northwest helped him find his passion for music. After picking up the guitar for the first time at 21, Andy grew ambitious about his love for music, playing anything from the blues, classic rock, jazz, folk music, to bluegrass. It didn’t really matter what he was playing, so long as it involved six strings and a melody.

Andy played his tunes and, like most musicians, realized that there was unavoidable wear-and-tear on his guitar that plagues everyone, but instead of compromising and finding his way to the nearest guitar store in search of a string change and minor repairs, Andy asked his friend, Steve Holst, to help him with the repairs. This utilitarian way to save a few bucks and learn more about his instrument would turn out to be a defining moment for Andy; after this, Andy shadowed Steve and began to learn the ins and outs of repairing guitars.

Andy grew passionate about the inner workings of his instrument, and he realized that he didn’t have to stop at small bridge adjustments and tunings, instead, he asked Steve if he might build him a ukulele. But instead of building Andy a ukulele, he simply told him: “you should just build one.” These words would eventually bring Andy to where he is today: building his own guitars that he now plays and sells. Andy remained in Eugene for a while after learning all he could from Steve, but once again the urge for a change in landscape hit him–Bozeman was the next stop on the luthier’s journey.

The aspects of Bozeman (and Montana in general) that appeal to Armstrong the most are the state’s laid back mountain lifestyle, and the “natural wonder in every direction.” Like a lot of Bozemanites, Andy enjoys being out in nature–whether that manifests itself in the form of hiking, camping, fishing, mushroom hunting, rafting, or snowboarding, he just appreciates having nature right outside his backdoor. The scenery of Montana and the local craftsmanship found in Bozeman is what really inspired Armstrong to hone his skills as a luthier. Armstrong mentioned that the opportunities that he found shadowing other luthiers is what made him want to stay in Bozeman, and he also stated that the presence of the Gibson factory also seems to resonate within the music community–lending passion to the musicians and artists striving to bring quality music and instruments to Montana. After moving to Bozeman, Andy began looking into possible shops and luthiers that he could apprentice with and learn more about crafting instruments. He came across Kevin Kopp, a local luthier, and decided it wouldn’t hurt to shoot him an email. After sending that first email, Andy said it was a “hard no” from Kopp, but that wouldn’t stop him. After checking out the rest of the luthiers in the area, Andy persevered, restlessly sending emails and contacting Kopp until he landed himself a tour of Kopp’s workplace. After seeing the shop, Andy could only dream about building guitars in this very place, but there wasn’t any work for him, at least not luthier work; while Kopp didn’t need any help around the shop, he did need help designing a website. Maybe it wasn’t building guitars, but it was a way in the door for Andy and he quickly offered his assistance in exchange for some insight into Kopp’s building process.

After building a website, Armstrong then began building guitars alongside Kopp. Originally inspired by repairs, Andy expanded his craft into building guitars: “I couldn’t afford a handcrafted guitar, so I wanted to try building one.” Armstrong credited Steve Holst and Kevin Kopp for guiding him as he learned to build guitars and ukuleles, as well as some books and tutorials on instrument building.

It took some time, but eventually Andy started crafting instruments he was proud to play. Andy began building under the name of Pirate Guitars in 2016 and his style primarily relies on traditional shapes, including the L-00, L-1, OM, Slope D, and Dreadnaught. Andy draws a lot of inspiration from art, old guitars, the materials he uses, and what type of music the instrument will eventually play. As a musician myself, when I actually got the chance to play one of Andy’s guitars, I was thoroughly impressed with the quality and tone–these aren’t the campfire guitars you don’t mind getting wet during a camping trip. 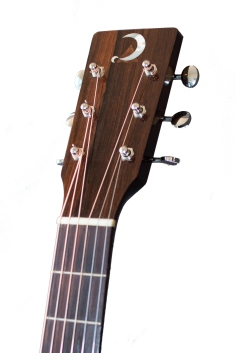 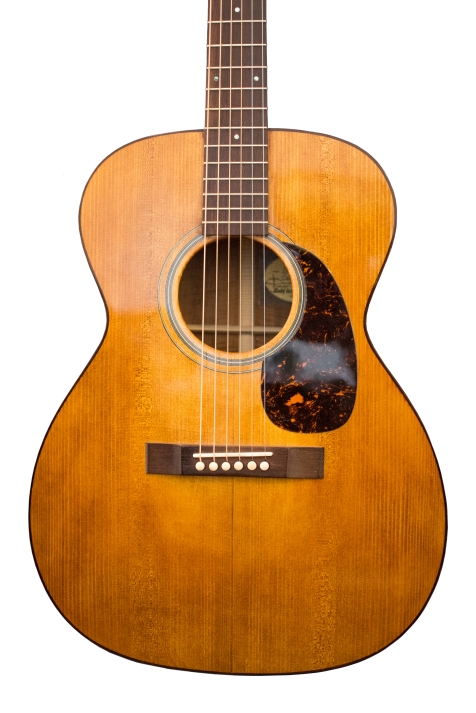 Armstrong says he currently builds about 10 instruments a year, including 5 guitars and 5 ukuleles and he mentioned that he likes to use, if possible, Engelmann Spruce that is often hand-cut by his colleague in the local forests. Armstrong also prefers to use locally made tuners by Waverly Tuners out of Bozeman. Andy’s guitars are born of Bozeman, both crafted and sourced, and there’s something to be said of this process in an age of overseas-mass-produced instruments.

When it comes to customers, Andy mentioned that most of his guitars are custom orders, with a smaller portion being sold to local shops. When he began building in Bozeman, he would work his day job from 4:30am-12:00pm, and then head to the shop from around 1pm-6pm, working long hours so he could pursue the passion he has as a luthier. Andy still works approximately 12 hours on weekdays, and 8 hours during the weekend.

Although Andy says the hand-built market is competitive, he is slowly making a name for himself. While he humbly admits that “[he’s] still starting,” you wouldn’t have any indication of his supposed fledgling skills by looking at (or playing) his guitars and ukuleles. Armstrong mentioned that Bozeman is a great place for “make-your-own” type opportunities, showing the level of support that Bozeman has for locally owned businesses. When asked about local Montana luthiers that Andy looks up to, he mentioned Kevin Kopp, Bruce Weber, founder of Weber mandolins, and Dan Roberts. While it may seem like a small community, there is a wealth of luthiers in Montana looking to hone their craft and produce quality, handmade instruments–you just have to know where to look.

When asked who he’d like to see playing a Pirate Guitar, he said Billy Strings, Molly Tuttle, or Nick Perri. “I’d love to just give them a guitar and have them rip on it for a couple years just to see what they could do with it,” and maybe he’ll get the chance to do just that.

Looking forward, Armstrong has plans for several new designs, including torrefied wood, a possible 3/4 parlor guitar, as well as some new ukulele designs. Be sure to watch out for his guitars and ukuleles, and follow on Instagram. Contact Pirate Guitars by phone at (507) 206-1044 or email at pirateluthier@gmail.com